4Scarrs Gaming Review: Yo-Kai Watch 2 is a game that all ages will enjoy

It's been under a year since the first Yo-kai Watch game was released in North America, and this time around Nintendo and Level-5 are back two new games staring the strangely charming troublemakers, Yo-kai. In both Yo-Kai Watch 2: Fleshy Souls and Yo-Kai Watch 2: Bony Spirits you can play as either a boy or girl who travel back in time. All your favourite characters are here including your Yo-Kai butler Whisper, and cat friend Jibanyan, as you discover the origins of the Yo-Kai Watch itself.

Yo-Kai Watch 2’s story is every bit as entertaining as the first game and in most cases surpasses it. You begin your journey as either Nathan Adams or Katie Forester, the choice is up to you, and you discover that your Yo-Kai Watch has been stolen in the middle of the night while asleep. However, the next day you awake with a case of amnesia, all your knowledge of Yo-Kai and the Yo-Kai Watch have been forgotten. After meeting up with some friends and then stopping by a shop, Whisper the friend butler shows up and gives you a severe case of déjà vu. After talking with Whisper, you start to remember past adventures and set out to explore the world for mischievous hidden Yo-Kai once again.

Fans of the first Yo-Kai Watch will feel right at home, as the same fun battle mechanics from the first game return in the sequel. As you befriend new Yo-Kai by first defeating them in battle, the familiar roulette wheel is used where you can call upon six of your Yo-Kai friends to help you out in battle (three will participate in battle and the other three are backup). Yo-Kai Watch takes a leisurely approach, emphasizing interaction with the world, and Level-5 has made a real commitment to portraying the perspective of a young child in the game; you will be looking under structures for items, climbing under obstacles while exploring, and spending your time with friends. It’s Level-5’s unsophisticated approach to gameplay that struck a chord with me, bringing back fond memories of my childhood that kept me entertained for hours. 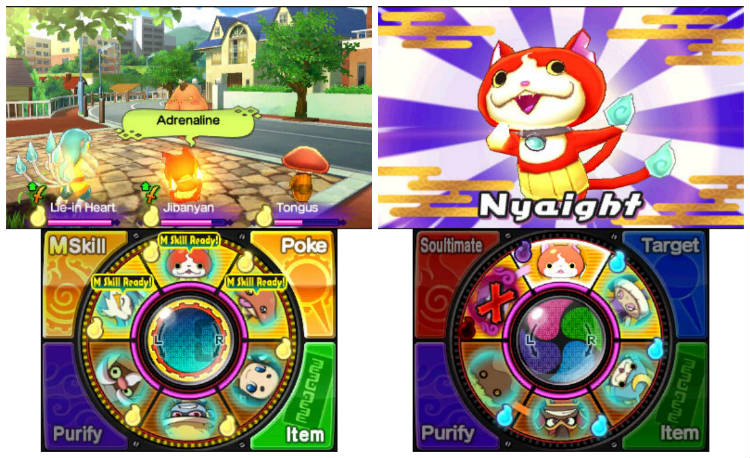 In addition to the main objectives in the game, Yo-Kai Watch also offers secondary quests where I logged some serious hours. You can complete these side quests at your leisure and quite often, they will involve helping people recover an item or defeat a mischievous Yo-Kai. If you decide to help them out you will be rewarded with items and experience points that will help you complete the primary objectives much easier. Missions will take you around different cities, like Springdale, and some challenges will require you to travel through time to complete them. This time around, quests and secondary quests each have their own colour arrow. This makes it so much easier to play both main objectives and secondary quests at the same time.

Yo-Kai Watch 2 offers a world that is dazzling, boasting some of the best visuals of any game on the Nintendo 3DS family of systems. The graphics provide a colourful aesthetic, character animations are top notch, and there quite a bit of cutscenes that are just as good as the anime show. The 3D visuals work really well and emphasize the deep and detailed environments. The music in Yo-Kai Watch 2 is light and catchy, the dialogue is humorous complete with top notch voice acting that sounds as if it was right out of the cartoon.

As mentioned above, Yo-Kai Watch 2 comes in two different games: Fleshy Souls and Bony Spirits. Each version contains exclusive Yo-Kai for you to catch, but there is no need to worry. Each game comes with a trading app that allows you to trade Yo-Kai either local wireless, or via the internet.

This time around, there is an online mode in the game that you can play with up to four friends via local wireless and online. Using pre-selected Yo-Kai teams of six, Challenge Mode lets you battle with friends to see who will emerge victorious. Additionally, in Blasters Mode you and your friends can team up to battle Yo-Kai in an overhead beat ’em up action style. I really enjoyed the online modes and they kept me coming back for more fun long after I had beaten the game. 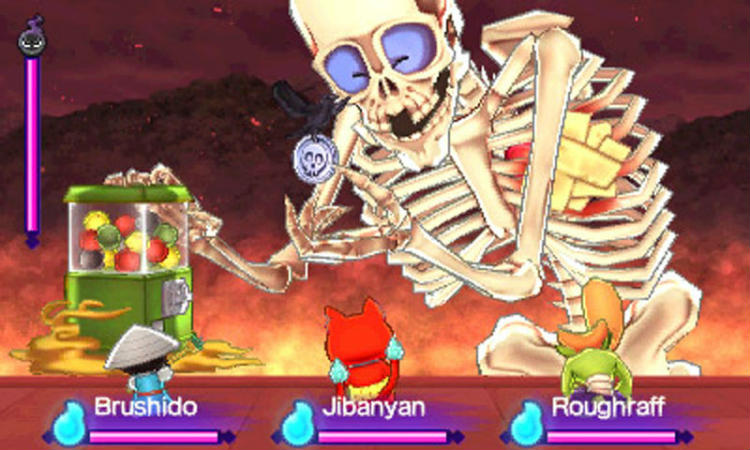 The first several hours of Yo-Kai Watch 2 is basically a tutorial to get you familiar with how things work and the world around you. If you have played the first game, this can become boring and you can quickly loose interest. Another minor gripe I have is that occasionally the camera would get stuck and things like treasure chests were hard to see. Luckily, you are able to zoom your map out and for the most part that resolves the issue.

Yo-Kai Watch 2‘s real-time battle system really sets it apart from other monster-collecting games, and I absolutely loved it—it’s fast-paced, interactive, and incredibly engaging. If you are worried about the combat being too easy, I assure you there is no need to worry. Yo-Kai Watch 2 features boss fights that offer up a massively challenging and seriously satisfying fight.
Fans of the original Yo-Kai Watch will have next to no learning curve when picking up this game, and those new to the series will find the in-game tutorials helpful.