4Scarrs Gaming Review: ReCore is a must play game on Xbox One 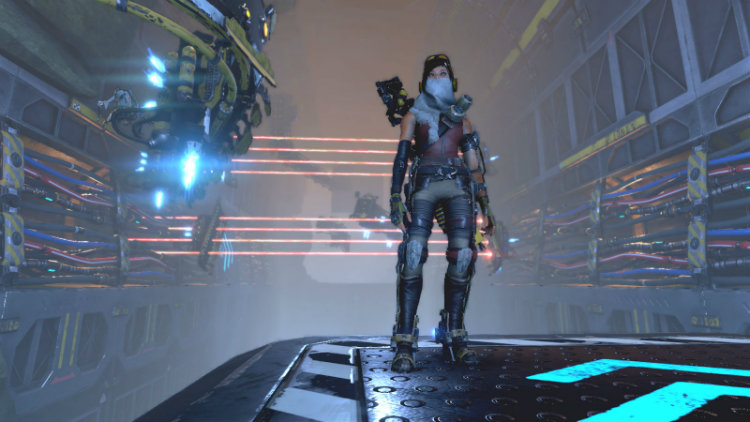 First revealed at E3 2015, ReCore caught the attention of many gamers when big time industry names like Keiji Inafune—of Mega Man fame—and Mark Pacini—Director of the Metroid Prime series—were a part of ReCore’s development. Heavily influenced by the Mega Man and Metroid franchises, this Xbox console exclusive is the first Xbox Play Anywhere game. Gamers can play on both the Xbox One and Windows 10 and seamlessly pick up where they left off on each version.

ReCore’s story follows Joule Adams, a volunteer who has traveled from Earth to the utopian colony of Far Eden to build humankind’s new home. After waking up from hundreds of years from a cryosleep, she discover that nothing has gone according to plan. Along with her Corebot companions, Joule travels throughout Far Eden to uncover the secrets behind the failed mission.

Is ReCore the next big franchise from Microsoft? How does the mix of fast action and shooting hold up against the triple A titles coming out this fall? Let’s take a look and find out why ReCore is a game that you should not pass up playing.

Right from the very beginning, ReCore’s story caught my interest and kept it though out the entire game. The game begins on the desert world of Far Eden where Joule Adams and her Corebot Mack awake to discover that world is covered in sand and is filled with robots that are seemingly out to kill her. As you traverse this huge world, the bond between Joule and her Corebot companions not only become the focus of the story but also the gameplay.

Joule’s personality and charisma drew me in and had me on the edge of my seat wondering what dangers and mysteries laid ahead. Her robotic dog like Corebot companions, Mack, Seth and Duncan make perfect sidekicks and don’t feel like they are just tacked on to the game. Each of these Corebot companions have unique abilities that you will need to reach certain areas of the game. You can also customize your robotic K-9 companions to increase their stats. 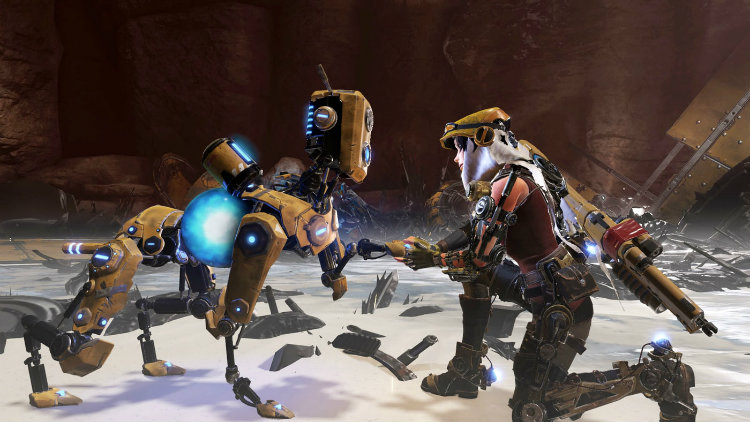 The majority of ReCore takes place in a hub world called the Shifting Sands. This massive windswept desert is made up of several different areas that are interconnected and simply stunning. Within each area you will fend of numerous enemies, take in amazing sights, battle in dungeons, and discover hidden resources. Dungeons are varied and not all the same, they consist of adventure/stories, challenges, rushes or combat.

Combat in ReCore is one of the game’s most appealing features. As you progress throughout the game, your gun evolves and eventually is tailored to combat enemies in four different colour modes—blue, red, white, and yellow. Each enemy you encounter will correspond to a colour—sometimes enemies are made up of a combination of colours. For example, an enemy that corresponds with yellow will take more damage with yellow shots. 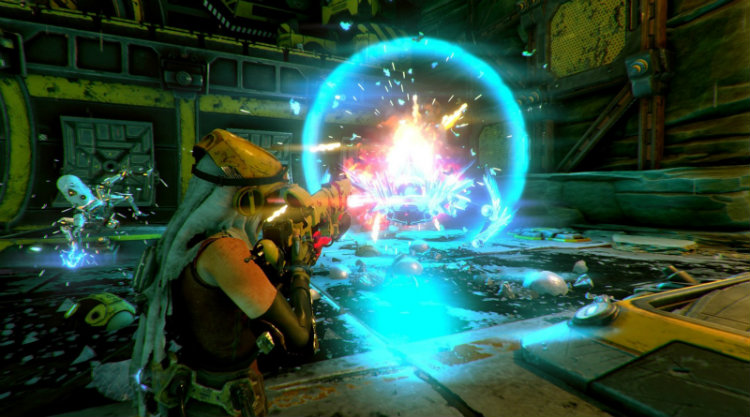 For the most part, ReCore is visually impressive. However, there are times when some textures look to be a lower resolution and do not fit in with the surrounding environment. Additionally, I noticed that sometimes the camera would veer out of control, swing all over the place, and get stuck behind a wall or large obstacles. Moreover, the single biggest issue with ReCore are the load times. A recently released patch has cut the load times down dramatically but they can still last more than 30 seconds.

Overall, I really enjoyed ReCore and it lived up to all my expectations since it was first shown at E3 2015. I loved the character design of Joule and her Corebot companions, the story and combat in ReCore drew me in and kept me wanting more. Puzzles were challenging but I never felt frustrated or that they were unfair.

There are a few minor issues with the game, but nothing that would stop you from enjoying the amazing experience that ReCore offers. ReCore brings a breath of fresh air into the gaming lineup this fall. I applaud Microsoft for taking the plunge and introducing a new IP, and I would love to see more Joule in the future. If you are looking for something different and fun this holiday season, do yourself a favour and pickup ReCore—you will not regret it.