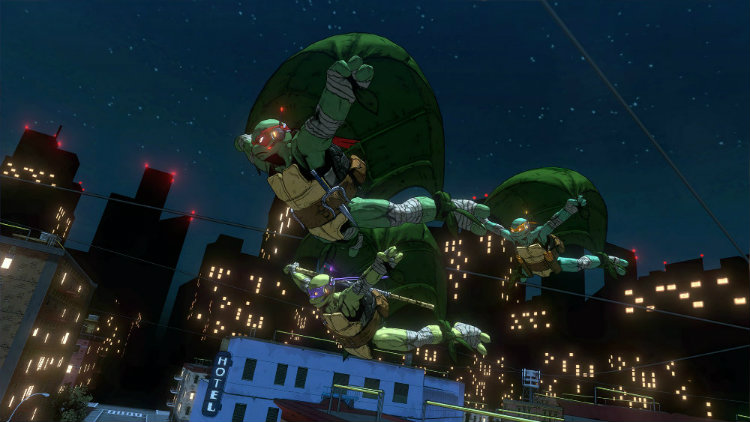 Teenage Mutant Ninja Turtles: Mutants in Manhattan is the brand new cel-shaded third-person, team-based action-brawler from developer Platinum Games and published by Activision. As a fan of the heroes in a half shell, when Activision announced that a new game was coming I was absolutely thrilled. To be honest the last turtles game that I really enjoyed was Turtles in Time on the SNES, so it has been awhile since a decent game has been released.


Activision has made sure, that whatever system you own, you will be able to get your turtle fix, as it is available for the PlayStation 4, Xbox One, PlayStation 3, Xbox 360 and PC. Could Teenage Mutant Ninja Turtles: Mutants in Manhattan finally be the break out game that we’ve been waiting so long for? Let’s take a look and see what Activision and Platinum Games has in store for turtle fans around the world. 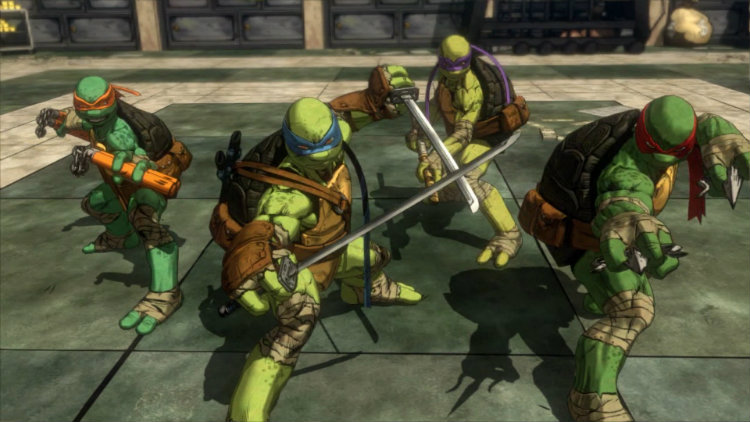 Mutants in Manhattan follows a familiar story line that fans of the series will be all to acquainted with. Shredder and Krang are up to their usual shenanigans, with the help of their henchmen Bebop, Rocksteady, Wingnut and Slash; they are attempting to take over the world. It’s up to our favourite heroes in a half shell, Leonardo, Raphael, Donatello and Michelangelo to stop Shredder and Krang from their devious deeds.

There really isn’t much more to the story, with a few cut scenes here and there to help you along to the next level. While the storyline might be a little sparse for some turtle fans, it really comes down to the gameplay for me that will make or break a turtles game.

Platinum Games did a great job recreating all of the turtles personality, and are as amusing as ever. Although the turtles are the main stars of the game, I was sad to see that a static picture on communications devices only represented both Splinter and April during the game. 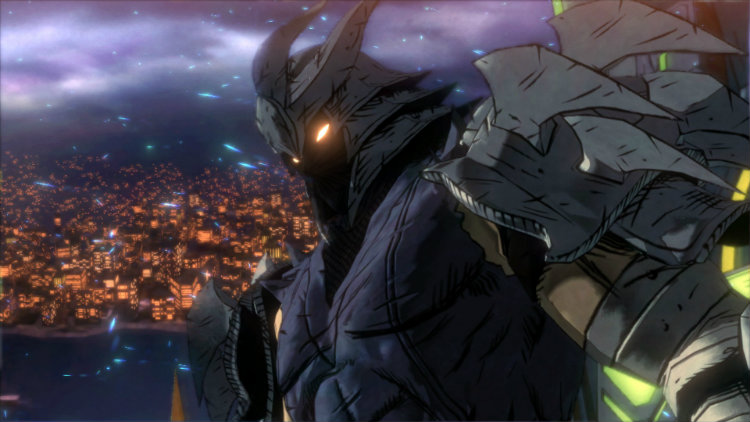 Easy to pick up combat

One of the best things that I like about Teenage Mutant Ninja Turtles: Mutants in Manhattan is that is easy to pick up and just start playing. Combat is fairly straight forward, similar to the Dynasty Warrior series, each turtle has a set of standard combos that use a both light and heavy attack. Additionally, you can equip each turtle with four special moves such as healing, a hard hitting attack, or an evasive move like a super jump. All of these moves require relatively easy button combination presses that are easy to memorize, making this game friendly for a wide range of ages.

Furthermore, Mutants in Manhattan contains special combo attacks that allow you to combine forces with your other turtle brothers to unleash a massive multi-hit combo attack that dishes out considerable damage, and is is simply stunning to watch. There is also a dodge and parry mechanic included in the game, which unfortunately is not as straightforward and easy to master as the attacks. Though, after some practice I was able to get a pretty good feel for it and added into my combat strategies against the foot clan.

As you progress through the game, you will earn training points after completing each level, which you can use to upgrade your special moves. Furthermore, you can equip the heroes in a half shell with charms that you find throughout the game or by using scrolls to craft them. In turn, these charms act as perks in that they can increase healing properties, allow you to gain more experience points, and so on. 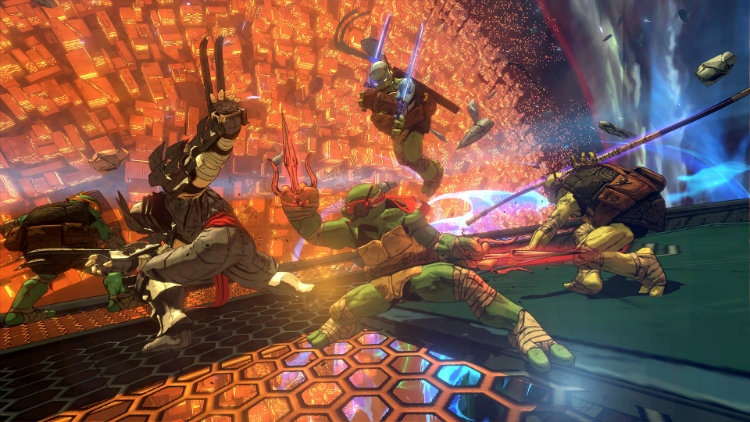 Platinum Games did a phenomenal job recreating a comic book feel with beautiful cel-shaded graphics that are both colourful and bright. Boss battles take place in familiar turtle locales like sewers, rooftops, and on the streets of New York that look like they are right out of the comic book. Simply put, Teenage Mutant Ninja Turtles: Mutants in Manhattan looks wickedly awesome! 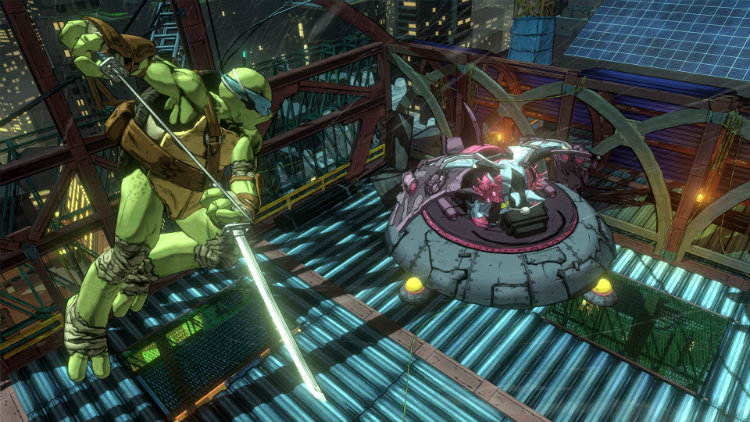 Multiplayer mode is where Mutants in Manhattan really shines. While playing the game by yourself is fun, it can at times get a little monotonous with wave after wave of enemies. You and three other players can team up online to take on the foot clan, and let me tell you it’s a blast.

Communicating with your teammates is essential; when your team pulls of a massive combo attack against a particularly menacing boss, it feels so satisfying. Though local multiplayer is missing, playing online with your friends is a blast, and is my preferred way to play this game. 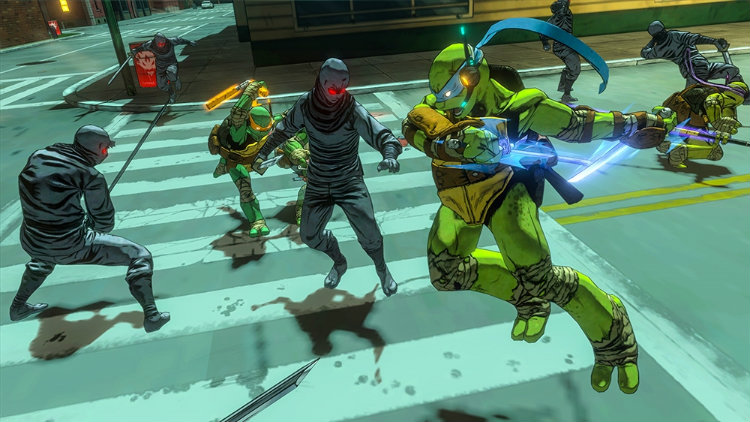 Although Teenage Mutant Ninja Turtles: Mutants in Manhattan is not a perfect game, all turtle fans should give it a try. Pretty much all your favourite characters from the turtle universe are here, and the combat system is both easy to learn and deeply satisfying. Occasionally the combat on the screen can get a little confusing with a lot going on, but it is something that I’m willing to overlook.

I absolutely recommend playing this game online with friends over the solo experience. It’s far more entertaining taking on the foot clan with friends, and the satisfaction you will get from performing team combos together is totally awesome.