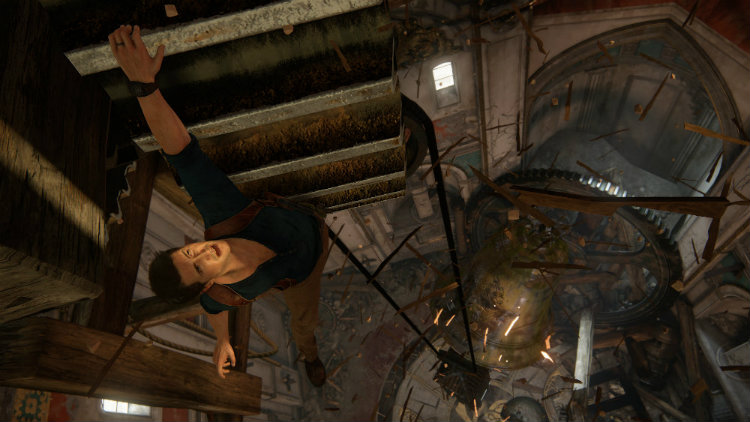 Since 2007, Naughty Dog has been capturing the heart of gamers with the Uncharted series of games on the PlayStation 3. Combining epic action-adventure gameplay, 3D platforming with a third-person perspective, and an unmatched storytelling experience—Nathan Drake’s treasure hunting adventures have contributed to the overwhelming success of the PlayStation brand. The latest instalment of this award winning franchise, Uncharted 4: A Thief’s End is now available exclusively for the PlayStation 4, and closes the curtain on the series with its most well rounded, personal, and fine-tuned entry yet.


In what is arguably the best PlayStation 4 game to date, Uncharted 4: A Thief’s End introduces new gameplay mechanics, larger and more expansive environments, an exhilarating multiplayer experience, breathtaking graphics with new character animations, and a host of other enhancements that truly displays the power of the PlayStation 4. Get ready to follow Nathan Drake on his last treasure hunt that will send him around the world, through jungle isles, urban cities, and snow-capped peaks. 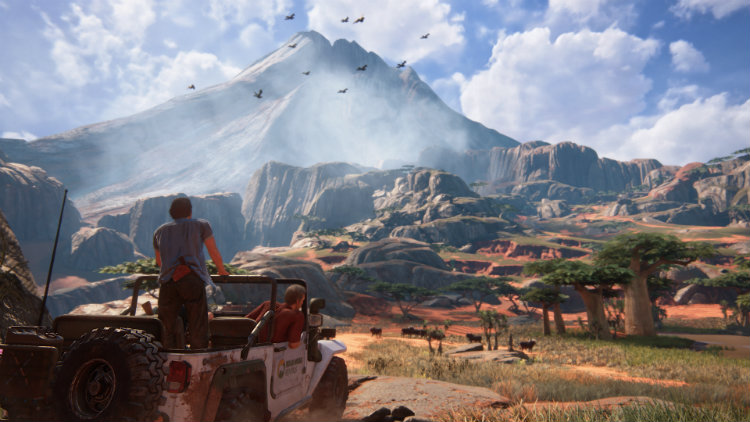 Naughty Dog’s signature storytelling that is the series best yet

Uncharted 4 takes place three years after the events of Uncharted 3, and we find that Nathan Drake has left the world of treasure hunting behind and now works for a salvage company in New Orleans. With his one and only true love Elena, both now live a simpler and relaxed lifestyle. However, it doesn’t take long for adventure to come knocking on Nathan’s door.

After Nathan’s presumed dead brother, Sam, returns after 15 years with a plea to help save his life, Nathan returns to his adventurous ways. Embarking on his most personal adventure yet, Nathan, Sam, and long-time partner Sully set out on a journey to find Captain Henry Avery’s long-lost pirate treasure to save Sam’s life. In the series grandest adventure yet, Uncharted 4’s journey will test Nathan’s physical limits, and push him to the edge to see what he is willing to sacrifice to save the ones he loves.

Naughty Dog’s signature storytelling shines, as Uncharted 4 jumps between different times in Nathan’s life, and tells the story of his troubled childhood in an orphanage and the relationship with his brother. More so than any other game in the series, throughout Uncharted 4’s story, Naughty Dog creates an emotional bond between Nathan and the player, which pulls you into his world. 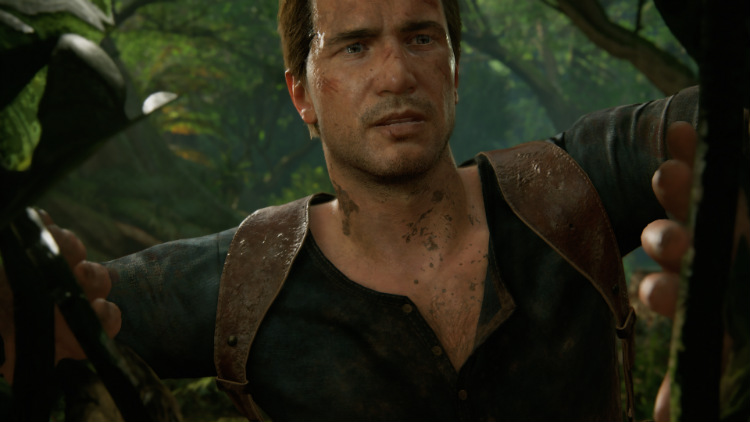 Traverse the world, and solve puzzles with all new gameplay mechanics

Uncharted 4 contains everything that you have loved about previous Uncharted games and adds exciting new gameplay mechanics that are the best yet in the Uncharted series. Immediately you will notice that Naughty Dog has tweaked Nathan’s rock climbing skills, which make climbing and avoiding hazards a breeze.

For the first time in the series, Nathan now has a grappling hook that allows you to travel across ravines, and lets you perform a melee attack on your enemies while swinging on a point to take them down them with one punch. In addition, you can also perform a charged melee attack with the hook that will also take down your enemy with one hit. The new sliding mechanic allows Nathan to slide down the sides of mountains to make it to those hard to reach places. In some instances, you’ll guide Nathan down the rocky terrain only to find a cliff that will require you to jump and use your grappling hook to latch on to a tree branch to avoid death.

Uncharted 4 adds a new stealth mechanic that allows you to hide using cover and tall grass to take out your enemies. Much like Metal Gear Solid, your enemies now have detection indicators with three different degrees of alertness. Luckily if you are creating too much of a ruckus you can run and hide to bring the enemies detection indicator back down. However, if you cause too much of a commotion you’ll alert the surrounding patrolling enemies, and be under heavy fire.

One of my favourite new additions to Uncharted 4 is the insanely wild drivable vehicles. Driving thorough the luscious open-world of Uncharted 4 is simply amazing and fun. While driving the 4X4 vehicle, there are several instances where you will have to use the winch on your vehicle to get you out of sticky situations, and one that will leave your heart pounding. While the awe factor of the world blowing up around Nathan may not be as prevalent as previous games in the series, Uncharted 4’s new gameplay mechanics, and refined controls more than make up for it. 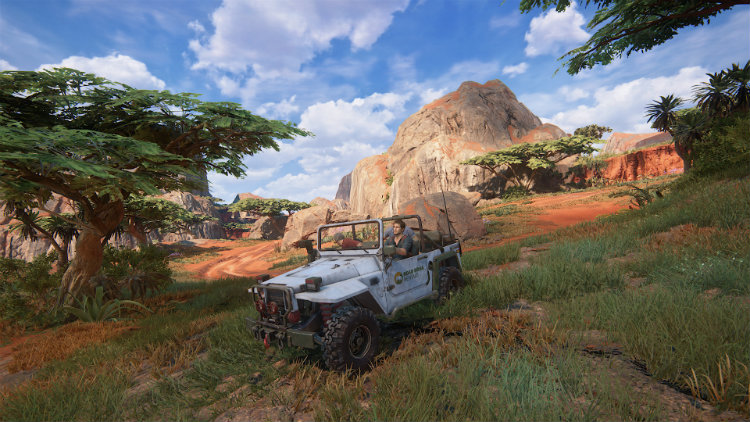 Naughty Dog has outdone themselves again, without a doubt Uncharted 4 is the best-looking PlayStation 4 game yet. From the expansive and gorgeous environments to the new character animations—you’ll be blown away at what the PlayStation 4 can do. To top it all off, Uncharted 4’s single player mode has a 1080p resolution and runs at smooth 30 frames per second without a hitch. The amount of detail that Naughty Dog has placed into Uncharted 4 is unbelievable.

Nolan North (Nathan Drake), Richard McGonagle (Victor Sullivan), and Emily Rose (Elena Fisher) return one last time to give the series best performances yet. The voice acting and motion capture bring these characters to life like never before and help create an emotional connection to each character. 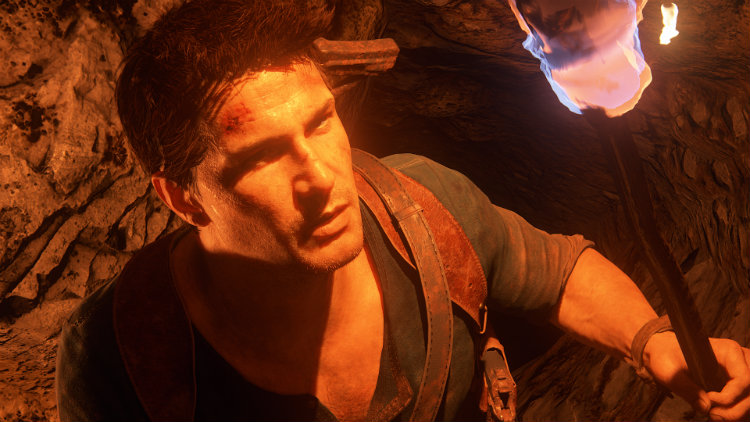 Multiplayer fun that can’t be overlooked

While it’s true that the main draw to Uncharted 4 is the single-player story mode, there is also a fully featured multiplayer mode completed with weapon leveling and a whole slew of unlockables. Right out of the box Uncharted 4 comes with eight, four main modes, and a warm up playlist that gives you the opportunity to explore the new gameplay mechanics available. With plans for additional free DLC for the next year that include new maps, more weapons, and more boosters —there is more than enough content that will keep you playing for a long time to come.

Uncharted 4’s multiplayer mode controls much the same way as the single-player campaign mode, and spices up the gameplay with the introduction of mysticals and sidekicks that are purchased with in-game cash that you earn during battle. Mysticals allow you to summon the spirits of well-known supernatural elements from the Uncharted series to aid you in battle, such as the spirit of Djinn that gives you the ability to teleport short distances. While sidekicks allow you to spawn NPC allies ranging from snipers, hunters, brutes, and saviors, which will back you up in battle.

Out of the four multiplayer modes: Ranked, Command, Team Deathmatch, and Plunder; Command was my favourite. In this mode, you capture Command Sites to steadily add points to your side, or knock out enemy Captains for a large point bonus. With multiple command sites, you must choose when to guard and when to go on the attack to takeover a new command site—teamwork is necessary. 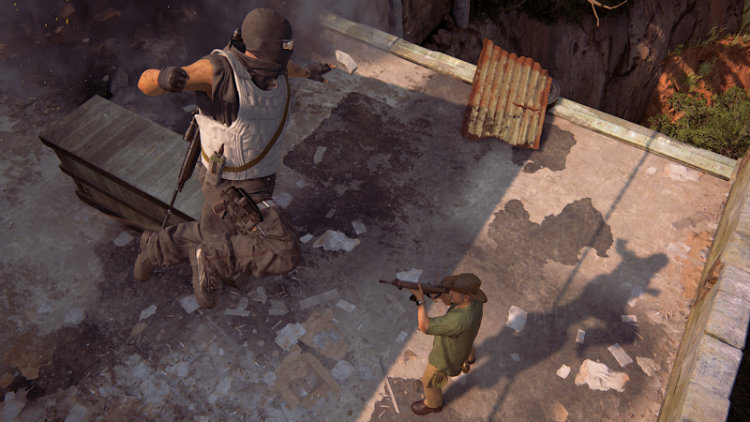 It’s without a doubt that Uncharted 4: A Thief’s End is the best game in the series and finest game out on the PlayStation 4. With an amazing story that connects you with Nathan Drake, new and exciting gameplay mechanics, spectacular visuals coupled with fantastic performances, and a multiplayer mode that gives life to the game long after you have beaten the single-player campaign—Uncharted 4: A Thief’s End is a fitting farewell to a franchise that many love.

Uncharted 4 is a shining example of near perfection, and sets the bar that all other games in the action-adventure genre will be compared to. If there is one game that no gamer should miss this year it has to be Uncharted 4: A Thief’s End.