The Mario series has never really had an in-depth story line but that has not stopped Mario from becoming the most popular video game series of all times. In Super Mario 3D World on the Nintendo Wii U, Bowser and his minions are up to no good yet again.  However this time Bowser has his eyes set on capturing someone else besides our beloved Princess Peach! Bowser and crew have invaded the Sprixie Kingdom.  Now its up to Mario, Luigi, Peach, and Toad to save the Sprixies by fighting their way throughout the new kingdom. This brings a refreshing change of pace and introduces some new characters to the Mario universe.

Super Mario 3D World allows the player to either play by themselves or with up to 3 other friends. Just as in the classic NES game Super Mario Bros. 2, each character offers slightly different abilities. Mario runs and jumps with equal abilities, Luigi can jump higher than anyone else, Peach can float and glide in the air for a brief amount of time, and Toad offers a slight speed advantage over everyone else. You will be glad to hear that just as in other Mario 3D games the controls are spot on. All the characters respond to the slightest touch which makes exploring these amazing worlds a pure joy. Super Mario 3D World supports all of the control schemes the Wii U has to offer. You can use the GamePad, Pro Controller, and Wii Remotes. There is one slight down fall, I discovered that with the Wii Remote and Nunchuk it was difficult to play without having both the run and jump buttons under a single thumb. The obstacle like course levels compliment the gameplay allowing you to fling your character forwards, sideways, up and down with great ease. As with all other Mario 3D games the camera offers a great unobstructed view of the action with adjustable views which is vital for judging distances and stomping the baddies. Nintendo has employed a plethora of new gameplay mechanics all though out the game. However many of these gameplay mechanics are unique to specific levels, such as Mario and gang riding on the back of a friendly dinosaur down the raging river, while another level has our heroes swinging on a trapeze, or timing our jumps rythmiatically on disappearing blocks. 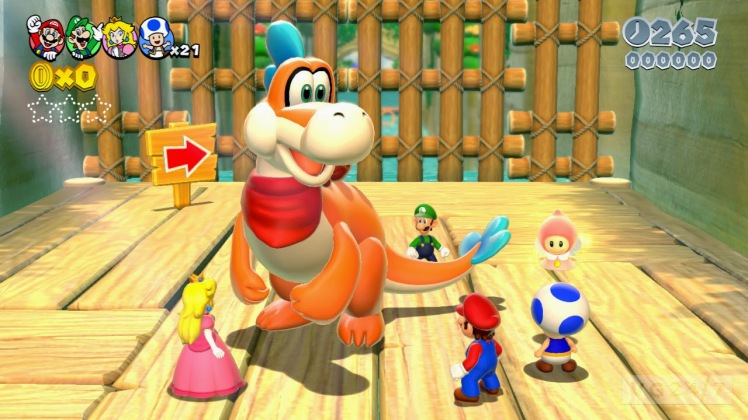 Fan favourite power-ups make a come back such as the Raccoon Suit, Bommerang Suit and the Fire Flower. In true Nintendo fashion they have also introduced new power ups such as the Cat Suit, which will allow Mario and gang to transform into a cat. While using the cat suit you can scratch enemies and climb walls. Another new power up is the Double Cherry, when you pickup one of these your character is immediately cloned on the screen. Pickup yet another Double Cherry and now you have triplets of your character. The Double Cherry maxes out at of clones of any character all running around at once on the screen. Each and ever clone is controlled by the player, all running and jumping at the same time. This sounds very chaotic and at times it is, however the levels that use the Double Cherry make cleaver use of the power up by letting you spread your characters out for maximum effectiveness. Both of these new power ups allow the player to further explore these worlds and uncover secrets and otherwise hard to reach places.

The level designs also hold up to what we have come to expect in the Mario series, fun to play. The levels communicate very clearly what the objective is and what the goal is to complete the level, also offering multiple different ways of completing your goal. The many levels in Super Mario 3D World take advantage of the gamepad, such as requiring you to blow into fans, or tap blocks to advance. One of the most memorable levels in this game requires Mario and gang to boost along a path using turbo pads and springboards. This is all done with great ease and joy, something that Sega has yet to master with the Sonic franchise in the 3D world. Each level is connected via an overhead world map, where the player has the ability to roam freely and walk around. This ability to roam freely offers the player to also find the occasional hidden coin, 1up, or even encounter the random fruit machines. If you are lucky you can discover secret levels that feature Captain Toad. Our fearless Captain is an explorer who can not jump, and the levels are played in a 3D cube environment which the player rotates. These levels are fun and require full player control of the camera.

Super Mario 3D World is fun to play on your own, but its when you have another friend or more in the same room playing is where this game really shines. It can at times cause chaos on the screen when playing but at the same time its pure joy. Just imaging having 5 toads on the screen and then your friend picks up the Double Cherry and now all of a sudden there are 5 Luigis on the screen as well. Some of the joy can be had while “accidentally” bumping your friends off a cliff. Just as in the New Super Mario Bros series, players who die come back in a protective bubble allowing them to rejoin the game when its safe to do so. A featuring missing is the ability to play online multiplayer. Can you imaging just how fun it would be if you were able to play with other players from around the world? 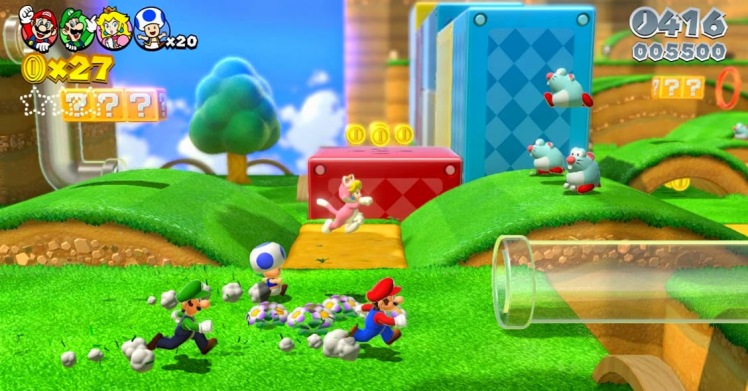 The graphics are the best yet in any Mario game. Upon first playing Super Mario 3D World you will notice just how beautiful the game is. This is the game to show to your friends and family when revealing the Wii U to them for the very fist time. Absolutely everything in the game looks fantastic including Bowser himself. Running at a stunning 720p and silky smooth rock solid 60 frames per second. There is not one seam showing or jagged edge to be found. The sound is a direct compliment to this game, with a fully orchestrated soundtrack the music never gets old. Electric guitars are used for Bower’s theme and the ghost house music is definitely one of my all time favorites.

If you haven’t already picked this game up do so now, in my opinion it is the best Mario game of all time. This game offers endless hours of enjoyment not only by yourself but playing with others, excellent level design, superb graphics and an amazing amount of content in the game. I was amazed at just how much there was to do in the game, Nintendo could have easily released some of the content in several DLC packs but choose not to and provide the value that they have become known for to gamers. If your not convinced yet check out some gameplay directly from the game it self.