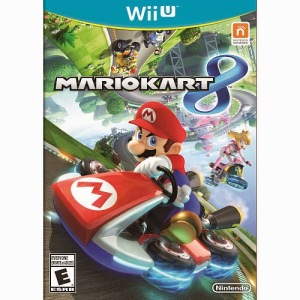 September 1st 1992 may just be one of the most memorable days in the video game world, as Mario Kart for the Super Nintendo was released in North America. Selling nine million copies worldwide, Mario Kart for the Super Nintendo was the best selling game for the system.  Fast forward to May 30th 2014 almost twenty-two years later and Nintendo is releasing Mario Kart 8 for the Wii U. One of Nintendo’s most popular franchises, the latest Mario Kart is just as fun and frenzied as ever.

Mario Kart 8 has an impressive thirty characters to choose from with new comers such as Ludwig, Morton, Pink Gold Peach, and Rosalina just to name a few. Mario Kart 8’s character selection is by far the most expansive of any version to date. Some notable favourites from past incarnations of the game such as Diddy Kong, and Birdo are absent from Mario Kart 8. 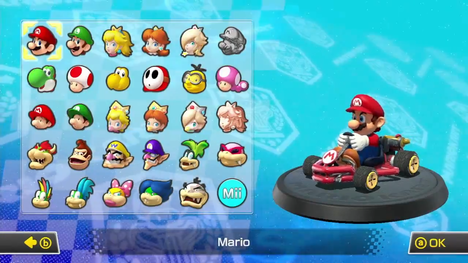 Nintendo has also updated the vehicles in the game, by taking the mix and match approach. Nintendo has added ATVs to the selection of vehicles to keep things fresh and new. The player can build and configure their kart by choosing a body, tires, and a glider that best suits their driving style and their characters stats. More parts can be unlocked by collecting coins that are found on the many tracks of the game. Just as with its predecessors under water and gliding have made a return. Anti-gravity modes have been introduced and include tracks that twist and turn upside down. Your kart’s tires will flip into afterburners and your kart will stick to walls and ceilings. While in anti-gravity mode, bumping into specific objects and other characters speed up your vehicle. 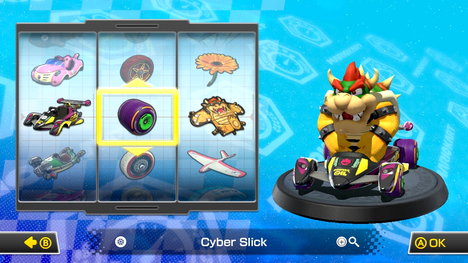 Players can now hold only one item instead of two, as they have been able to in previous games, however the game now offers a more even gameplay balance. New items such as the Piranha Plant, chomp on close by players taking them out of the action for a brief period of time. Previous items such as the Lightning bolt and Blue shell are also included in Mario Kart 8. However, I noticed that if the player is in first place most of the power up are just coins instead of defensive items to help protect the lead.
Mario Kart 8 offers several modes to play such as Grand Prix, Time Trial, Versus, and Battle modes. Versus mode allow the player to customize the race by selecting engine class, CPU difficulty, items, vehicles, track selection, and number of races. Battle mode has seen the biggest change, as specially designed arenas are no longer present and the action takes place on a selection of full length tracks. This change has taken away most of the fun in this mode as there is a five minute time limit and the player spends most of his or her time searching for the other players. Mario Kart 8 introduces another new feature called Mario Kart TV. This feature allows the player to watch and edit footage of their races by slowing down, rewinding, fast forwarding, and focusing on a certain character in crucial moments of the race. Interestingly if the player has a YouTube account they can upload the replays for everyone to see from right in the game. Single player mode offers the player four cups containing four new tracks in each, in addition to another four cups of tracks from previous Mario Kart games for a grand total of 32 tracks. Online play allows up to twelve players each race from around the world to compete against each other for the number one spot. In my opinion this is where Mario Kart 8 really shines. Customized tournaments can also be setup and run for even more fun. 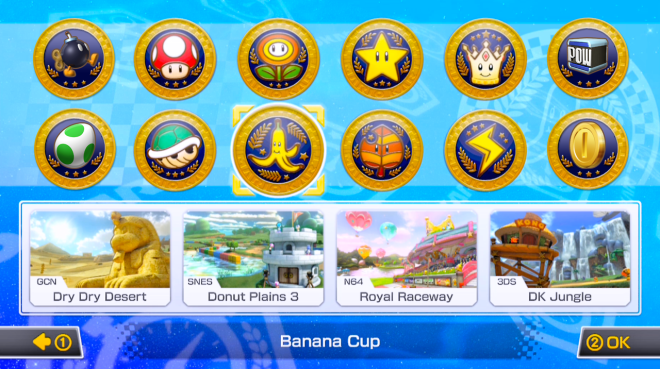 Mario Kart 8 is one of, if not the best-looking game available on the Wii U today. Just as with Super Mario 3D World, Mario Kart 8 offers a crisp 720p picture with a constant 60 frames per second. You can see facial expressions on all characters during the game. Hit a boost jump and watch as your character’s face lights up. Throw a red shell and watch the evil glare your character gives the other character as driving by. An amazing amount of detail has been placed in each and every track right down to the spectators. The music is top notch, offering a fully orchestrated soundtrack bringing each environment to life. 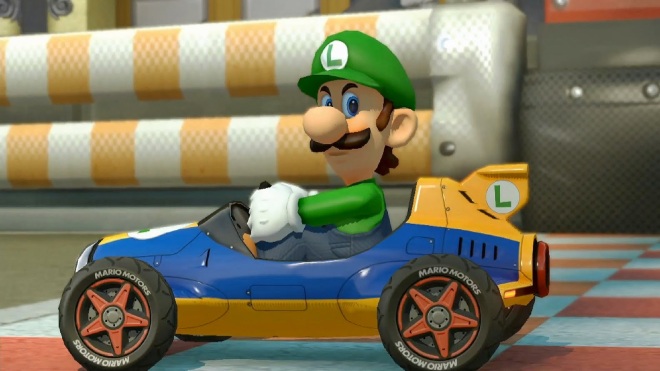 In closing, Mario Kart 8’s new additions and its tried and true gameplay make this one of the must have games for the Wii U. On August 27th, 2014 Nintendo released its first downloadable content for the game. This free downloadable content contained three vehicles: 2014 Mercedes-Benz GLA, 1957 SL 300 Roadset, and the 1934 W25 Silver arrow. Two additional DLC packs have been announced. Each of these packs will include four additional vehicles, eight additional courses, and three new characters. The new characters are from other popular Nintendo franchises including Animal Crossing, F-Zero, The Legend of Zelda, and Exciebike. Nintendo is offering additional multi-coloured Shy Guys and Yoshis when you pre order both packs. These new DLC packs are expected in November 2014 and May 2015.
Mario Kart Review Reviews Videogames Wii U