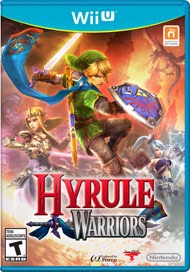 Hyrule Warriors marks the first collaboration between Koei Tecmo and Nintendo on a Nintendo owned IP. First announced in December of 2013, Hyrule Warriors has been developed by Omega Force and the famous Team Ninja. Heavily influenced by the popular Dynasty Warriors series of games, Hyrule Warriors is an eloquent mix of hack and slash mixed with familiar locations and characters from The Legend of Zelda games. Offering a wide selection of familiar playable characters from the Legend of Zelda universe, players are able to choose from characters such as Link, Sheik, Zelda, Ruto, and Ganondorf.  That is not all, though as there will be a total of 13 playable characters, some will need to be unlocked while others will be selectable from the start.


Hyrule Warriors further enhances the gaming experience by giving each character their own unique set of abilities and weapons. Players can level up their weapons and characters similar to role-playing games. The adventurous player can explore the land by opening chests, and exploring the vast environments to reveal items to collect, equip and use. Split into several stand-alone battles Hyrule Warriors offers recognizable locations such as Hyrule Field, Death Mountain, Twilight Field, and Skyloft all in amazing detail.


If you are looking for multi player action then Hyrule Warriors is right up your alley. Grab a friend or family member to help in local 2 player co-op mode.  No need to worry about split screen gameplay as the Wii U GamePad offers the player his or her own view of the action on the screen while the second player uses the TV.

The Adventure mode offers something different and unique. This mode features an over world map heavily inspired by the original Legend of Zelda games on the NES. Playing adventure mode will unlock additional characters, hard to find materials, and allow upgrades of their character’s features which will be useful in battle mode.

Not to be outdone by themselves, Nintendo will also offer several costume DLC packs at the time of release. Some of these costumes packs include:

The Nintendo Store in New York City recently tweeted that it will have a limited supply come release day September 26 of a special edition Hyrule Warriors. If you are still not excited for this game then be sure to check out some outrageous gameplay and we are sure you will be hooked. Make sure you head down to your local retailer and pre-order, September 26th cannot come fast enough.